Walter & Irvine Real Estate has been based at this historical building since 2000 after relocating from across the road at 189 Unley Road.

We are proud to have such an iconic building in the heart of Unley as our office.

The building still has many of its original design and bank features including a 3ft thick re-enforced safe, cash drop shoots and secret spy holes in the bank managers office.

Paul Makin from Today Tonight was thrilled to see that the office still had many of the old bank features and captured it to show Today Tonight Adelaide viewers. You can view the interview here or https://www.todaytonightadelaide.com.au/stories/old-banks

The City of Unley and Unley Historical Muesum formed this report about all the local historcial buildings in the area and errected information stations along Unley Road for locals and visitors to learn more about these wonderful buildings. 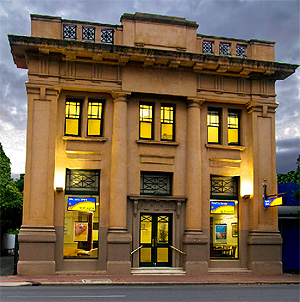 The National Bank purchased the property at 232 Unley Road to build a bank and residence. The National Bank operated in this building until the late 1990s. Its earlier branch opened in 1922 on Unley Road near the corner of Hart Avenue.
The original house on this property was a six-room stone and brick dwelling built in 1905 by Thomas Francis, a local builder.

GA Rule & Sons tendered and built the bank for about £3 200. The National Bank had James Francis Dowling as the manager earning £360 per annum. Like many bank managers, he lived on the premises with his family and most likely had a pistol. Bank pistols were to be kept clean, loaded, accessible to the officer in charge, and fired at least monthly.